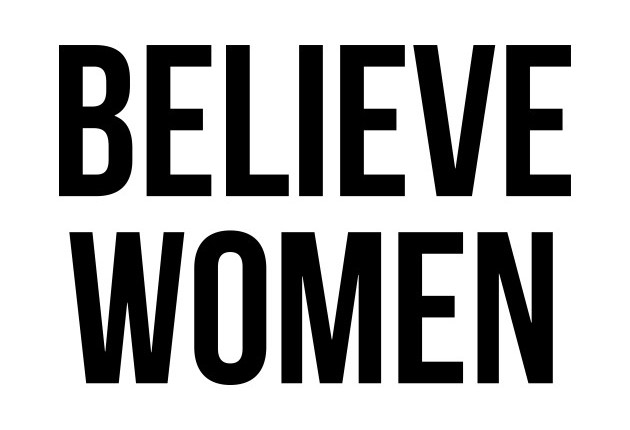 Anytime a victim of abuse speaks out, particularly a woman accusing a man, there is an immediate rush to defense. People speaking up about how this person has always been kind to them, they never witnessed any of this abuse, or we shouldn’t rush to judgement until there are cold hard facts to support it. Friends and family rush to protect their own, saying there’s no way. The problem with this is often, unless its physical abuse and photographs were taken, there is little to no proof the abuse occurred. So we are left with a decision. Believe the accuser or believe the accused. Time after time, the accused faces a little backlash, but all is mostly swept under the rug.

As an example, everyone was quick to forgive Chris Brown, because after all, even though you saw the pictures, Rihanna took him back. But then, he continued the behavior with other women. It took 60 women accusing Bill Cosby for us to believe it. 87 women accused Harvey Weinstein.

The shock and disbelief that occurs when you’re told this happened yet again is astonishing. Didn’t someone else tell you this before? Why are you surprised? Emotional and Mental Abuse is a strange thing. The abuser breaks you down, strips you of any self esteem, scares you into hiding the truth from others and from yourself. The abuser brings you to a point where you can only count on them and the thought of losing them terrifies you, even though you know the relationship is bad, even though you know you should get out. When the truth comes to light, friends and family will say, I had no idea. And you know what, they probably didn’t. I say this because I was someone who had no idea.

Let me tell you a story about my best friend, we’ll call her Anne and her ex, we’ll call him Larry. Anne and I have been best friends for years, to say we know each other better than anyone would be an understatement. We all met Larry at the same time, at a bar in our 20’s. He was friendly and fun and asked her out on a date. They dated for 2 years in which Larry attended every family and friend function, lavished Anne with gifts, went above and beyond for her and her friends, and seemed like a genuinely good guy.

It was strange when Larry’s girlfriend called Anne on the phone to ask who the hell she was and why she was texting her boyfriend. See Larry had a girlfriend where he worked and he had Anne. He was all ready to set Anne up 45 minutes from home so there was no chance the 2 of them would come in contact or anyone would question things. If Anne was far enough away from her friends and family, we would have no idea how often he was or wasn’t home.

It wasn’t until after their breakup, in which Anne was devastated for months on end, that she started to tell me things. Things like he wouldn’t let her go out unless he went with her. How he insisted she go straight to his house after work every day they were going to be together and he wanted her home so he could call her when he was at work. How he didn’t want her dressing up or wearing makeup because he didn’t want other guys looking at her. How he would at times “play fight” with her, but leave bruises. How one time it was so bad, he was dragging her down the stairs and his mother had to intervene. How he once made her perform oral sex on him while he was sitting on the toilet.

I had no idea.

He had threatened to leave her, told her she was worthless, stupid, wouldn’t ever find anyone else but him.

I had no idea.

The months that followed were hard on Anne. She cried all the time. He had damaged her so bad psychologically that she truly believed she would never find someone else. She would text and call him periodically because she was still stuck in the mentality that he was the only one for her. So much so, she stood on a street corner at our friends bachelorette party, sobbing her face off telling me no one would ever love her as much as he did. I smacked her in the face. I was so mad.

Mad at her for thinking it.

Mad at him for doing this to her.

Mostly, mad at myself because I HAD NO IDEA.

The Person Who Has No Idea.

As we get closer to the end of Game of Thrones‘ seventh season, it becomes increasingly difficult to focus on a particular moment because every moment is A MOMENT! Between Drogon letting Jon touch him, Gendry finally returning, Jaime and Tyrion coming face to face, and Jon creating the ultimate #SquadGoals to head beyond the wall, let’s focus on the not so obvious moments…
Click here to continue reading

These first 4 episodes of Season 7 have fed us Stark fans well! Bran and Arya both have made their way back to Winterfell and reunited with their sister, Sansa. While Jon is away, Lady Stark has been in charge and she’s doing a damn good job so far. She and Jon had some disagreements in the beginning, but let’s be honest, if Jon just had the good sense to discuss things with Sansa before announcing them to everyone, he would save himself (and us) a lot of headaches. Sansa is a character who went from “kill this bitch” to “protect her at all costs” over 7 seasons and she’s proven herself worthy of our devotion. This is a young woman who has gone through hell and back and is desperate for a real and true connection to someone. Even though she’s been with Jon a while, their disagreements and her not being so kind to him in the past, leaves her feeling lonely, until she sees Bran at the gates… click here to continue reading.

HBO’s Game of Thrones delivered quite the satisfying episode on July 30, 2017. The Queen’s Justice (S7, Ep4) brought us the long awaited meeting of Jon Snow and Daenerys Targaryen, but for me the night was made by none other than the Original Gangster of Westeros, Lady Olenna Tyrell. Lady Olenna has long been a fan favorite, what with her witty comebacks and overall disdain for Cersei. Her classy and quiet manipulations are the opposite of Cersei’s brash behavior…. click here to continue reading
*Published July 31, 2017 TV Source Magazine 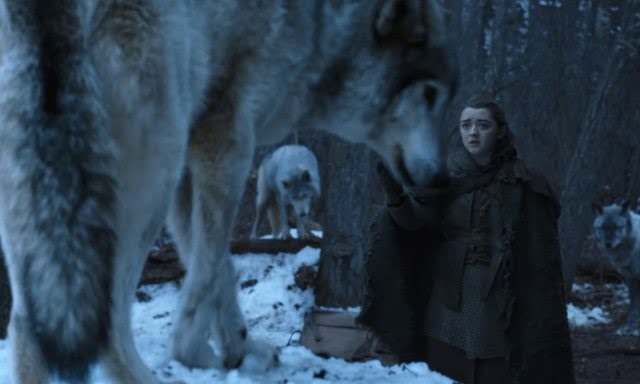 Sunday nights episode of Game of Thrones saw Arya reunited with Hot Pie while on her way to King’s Landing. Arya is a woman (yes I think we can stop referring to her as a girl now, she murdered an entire extended family) on a mission. Hell bent on revenge, Arya is trading baking tips with Hot Pie when he innocently questions why she isn’t headed north to Winterfell. Arya can’t imagine why he would ask such a thing, until he reveals that her brother Jon is now King in the North. Arya can’t drop her goblet fast enough and she’s out the door towards home.

Arya is headed for the Stark reunion we’ve all been waiting for, but not before a more unexpected reunion that comes in the form of her former Direwolf, Nymeria. Alone in the woods with her horse, Arya is surrounded by a pack of wolves being lead by a gigantic Direwolf. It doesn’t take Arya long to recognize this furry beauty as her own sweet pet, Nymeria. Hoping for a warm reunion, Arya pleads with Nymeria to come home with her. Nymeria stops snarling and gazes at her former family member before turning and leaving as if to say, I remember you, but this is my life now. Arya, hurt at first, steps back and wistfully watches Nymeria walk away, “no that isn’t you” she says, almost proudly.

This moment harkens back to season 1 when a much younger, unaffected Arya told her father that frilly dresses and castles with young Lords just wasn’t her. She recognizes in this moment that while all of this has been going on, Nymeria has made her own life. She has found her own pack. Perhaps, being someone’s pet was never for her.

In the books, the wolves play a much larger role than they do on the show. The showrunners have explained that apparently they’re too expensive to conjure up on tv? Butttt dragons… yeah, anyway, in the books, Arya and Jon have warg powers like Bran and often see through their wolves in their dreams. There are tales of a large pack of wolves killing off Stark enemies, like the Frey’s, led by Nymeria. A wolf killing Frey’s? Sound familiar? There is a reason each Stark child had a Direwolf and each wolf reflected their child. Nymeria, like Arya was thrust into a life of loneliness and fear. And like Arya, she found a way to make herself the strongest, the bravest, and the fiercest of the wolves.

Nymeria cannot go home with Arya, because a pet in Winterfell is a home that no longer fits her. One has to wonder if this is a reflection of Arya herself. After all she has been through alone, after everything she’s done, can she just go home? What will be there for her when she does? Arya has grown up so much, no longer the little girl she once was, now a Faceless Man and skilled assassin. Jon is having a tough time dealing with Sansa being grown, however will he manage Arya? Sansa, scarred by her experiences is no longer trusting, will she be able to connect with her sister? Perhaps, this journey home won’t bring Arya the warmth and happiness she’s wishing for. Perhaps, it no longer fits. Maybe, it’s not her. 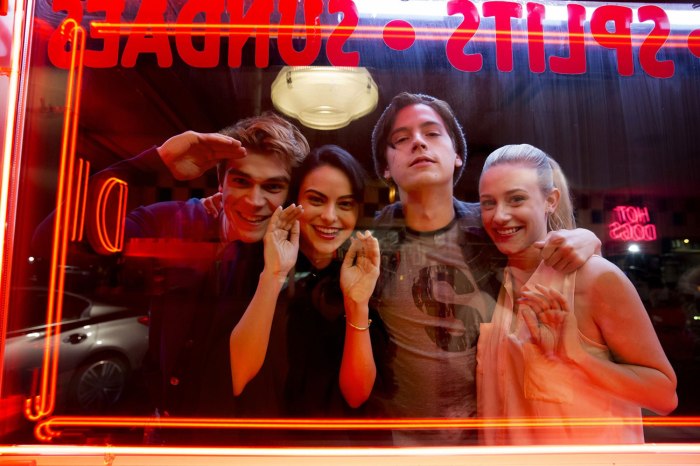 Riverdale: How will Season One End? What’s in Store for Season Two?

Riverdale: Ep 12 Anatomy of a Muder

Riverdale Recap: Episode 11- To Riverdale and Back Again